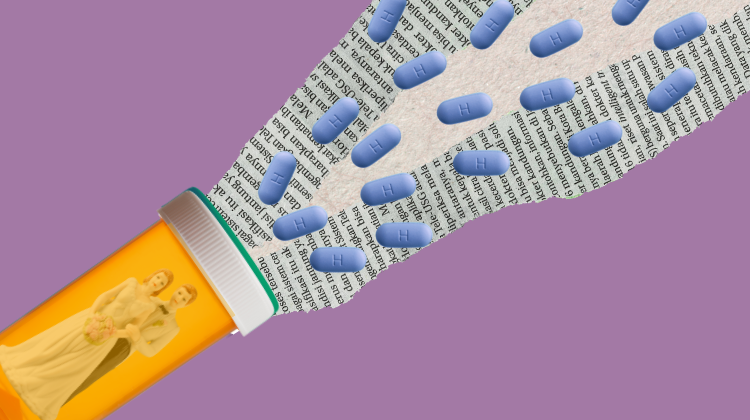 In 2020, a study in the UK found that HIV was rapidly increasing among straight people. The study found that 49% of all new HIV infections were among people who identified as straight.

The study also found there had been a decline in new cases among gay and bisexual men in the UK.

It’s important to note that because of COVID-19, there was a decrease in testing among gay and bisexual men, which may have impacted the data collected. However, there is still a spike in reported cases for heterosexual individuals.

In the U.S., 23% of new HIV cases annually are among straight people. This may sound minute, but it’s roughly 8,617 people in the U.S, which is no small number.

So how did this happen and what can we do to decrease new HIV cases for all people?

Although HIV and AIDS have always affected straight people, prevalence rates in the LGBTQIA+ community have historically been higher than prevalence rates for straight folks. LGBTQIA+ folks were still criminalized when the AIDS crisis first broke out.

Because simply existing as an LGBTQIA+ person was difficult, it is no surprise the AIDS crisis was stigmatized, ignored, and that an appropriate public health response was not taken.

Even with the inception of pre-exposure prophylaxis (PrEP) and through decades of tireless advocacy by groups like ACT Up, Prevention Access Campaign, and others, stigma remains.

Because of this, LGBTQIA+ people are still seen as the only demographic to need HIV prevention and care.

Straight People Are Less Likely to Get Tested

Unfortunately, straight people are more likely to be diagnosed with HIV at a later stage, after their health is already suffering. More than half of cases in heterosexual men are diagnosed late.

This is not only due to stigma but is also a result of poor sexual health education for many people.

Gigi Singer, a certified sex therapist with her MPH from Columbia’s Mailman School of Public Health weighed in on this. “One of the first iterations people used when referring to HIV was GRID. This stood for Gay Related Immunodeficiency. So obviously, right off the bat there was stigma with the diagnostic process.”

Singer also noted that, “In the U.S., you are likely to be asked if you are sexually active and about your sexual partners when you go to a primary care provider. If you are straight and are asking for an STI panel, you are not likely to be tested for HIV because of the stigma that still exists.”

Singer also noted that fewer than half of non-elderly adults in the U.S. have ever been tested for HIV.

Sexual Health Education is Not Comprehensive

Aside from testing rates, lack of comprehensive sexual education is also a huge barrier.

Singer said, “Comprehensive sex ed is the answer to a lot of our problems. School based sex education is an effective strategy for reducing the risk of HIV for everyone. It increases your knowledge, self-efficacy, and sexual empowerment. It also helps increase condom use and leads to later sexual debut.”

Singer said, “To avoid imasculization, many men demonstrate their masculinity through behaviors that put them at risk of HIV. This includes having multiple sexual partners. Obviously, you can have multiple sex partners and be safe, but many people do not have the tools to do so. Again, this goes back to education.”

Singer also said, “There is a perceived weakness of needing treatment or having a diagnosis at all when you are a straight man. Establishing yourself as ‘masculine’ contributes to risk and contributes to the problem of HIV stigma.”

What You Can Do

Here are some tools for you:

If You’re Afraid of Stigma or Want Privacy, You Can Get Tested From Home

For anyone who is afraid of facing stigma or having to speak with a doctor in person, you can get PrEP online with Q Care Plus.

With at-home and in-person options, if you opt for at-home tests, we send STI and HIV testing kits directly to your door in discreet packaging.

In some cases, stigma isn’t a concern. You simply want privacy around your sexual health, and that’s ok!

85% of people prefer testing for STIs and HIV from home, so you are not alone in seeking privacy.

Our Providers Specialize in All Things Sexual Health

Q Care Plus’s providers all specialize in HIV prevention and sexual health. Our providers come from a variety of backgrounds and treat people from all backgrounds, regardless of sexuality, and can help you get on PrEP.

Go to qcareplus.com to create a profile and get started today.

Gigi Singer, MPH (she/her) is a NYC-based sexuality educator who holds a Master’s Degree in Public Health from Columbia University with a certificate in Sexuality, Sexual & Reproductive Health and she is a trained sexuality educator; her Bachelor’s degree was in Gender, Sexuality, and Women’s Studies. She is the owner of The Gigi Spot LLC, through which she does consulting and freelance work in the digital sex education sphere (i.e. content creation, blog management, and blog writing) and she also works at the Museum of Sex in Manhattan. She loves talking about pleasure, sexual empowerment, sexual communication, and sex toys!