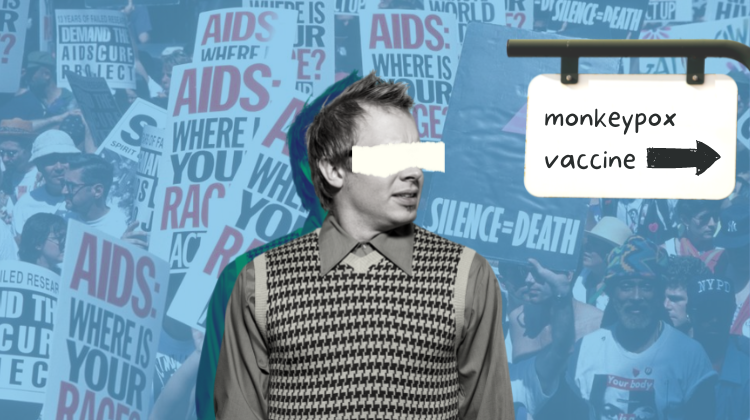 Here’s How You Can Avoid Misinformation and Protect Yourself

Monkeypox (MPX) is a disease transmitted by close skin to skin contact or transmission of bodily fluids that results in skin lesions and uncomfortable bumps on people’s skin. It also can cause flu-like symptoms such as fever, nausea, and more.

The first known case of MPX was detected during the 1970s in Africa. However, the U.S. has never experienced a MPX outbreak as severe as what we are experiencing now.

The monkeypox outbreak in the meantime has grown exponentially, with case counts doubling each week. Unfortunately, misinformation is already spreading rapidly, including the idea that monkeypox can only be contracted by men who sleep with men (MSM.)

Gigi Singer, who holds a Master in Public Health from Columbia University and is a sex educator, said one important thing to know is that, “Monkeypox is not an STI. It can be transmitted through close intimate contact, but it’s not an STI.

Some people are saying it’s the new HIV–which is super problematic in itself–but it’s not the same thing. You can’t control people’s rhetoric, but you can at least try to combat it.”

Many political activists, HIV prevention experts, epidemiologists, and queer activists have pointed out the frustrating similarities between the messaging and response surrounding HIV with that of MPX.

According to Politico, Harold Phillips, director of the Office of National AIDS Policy in the White House has acknowledged the similarities between the AIDS crisis and the current MPX outbreak.

“There are some similarities between the community that is being impacted by this disease. The pain, suffering, the fear of stigma, but this was not a laughing matter this time in the White House,” Phillips said, noting that during the AIDS crisis, White House staff were known to laugh and joke about the crisis during press conferences.

We asked Erice Taylor, RN and provider at the Center for Health Empowerment in Austin, Texas his thoughts on this news.

“I don’t like the way this is being presented in the media. Monkeypox is a virus that is not relegated to a particular community. Transmission is not just from sexual activity. You could be in an environment where somebody has it and you could possibly get it, especially if your immune system is a little off and you get exposed.”

Singer agrees with the sentiment Taylor shared: “The response is a reflection of homophobia and racism. This is a reflection of scapegoating, labeling MSM as promiscuous or hypersexual. It’s easy to distance yourself from it, but it really could happen to anyone, and it’s not their fault,” Singer said.

“Tackling misinformation in ways that you can. If you see a Facebook post that provides misinformation, message that person and ask them to consider taking it down. Correct people when they say things that are stigmatizing or that slut shame. Take the blame off of the person who is living with monkeypox. Ask them how they are feeling, replace that first instinct of fear and blame with compassion,” Singer suggests.

You can find sex educators like @getqcareplus, @pryority_malellc, and @thegigi.spot on social media for reliable, up-to-date information about MPX.

Try to follow your local health department to learn when resources come available to you.

Thankfully, there is a vaccine that is 85% reliable at preventing MPX. Vaccine roll out is slow in many states. But consider getting vaccinated when it is available to you.

Eric Taylor holds a Master of Science in Nursing from the University of South Alabama.

He also currently serves as NP Faculty in the Primary Care Center of Excellence at the Michael E. DeBakey VA Medical Center, is an instructor of Nursing at the University of Texas, and works at The Center for Health Empowerment as an RN specializing in PrEP.

Gigi Singer, MPH (she/her) is a NYC-based sexuality educator who holds a Master’s Degree in Public Health from Columbia University with a certificate in Sexuality, Sexual & Reproductive Health and she is a trained sexuality educator; her Bachelor’s degree was in Gender, Sexuality, and Women’s Studies. She is the owner of The Gigi Spot LLC, through which she does consulting and freelance work in the digital sex education sphere (i.e. content creation, blog management, and blog writing) and she also works at the Museum of Sex in Manhattan. She loves talking about pleasure, sexual empowerment, sexual communication, and sex toys!