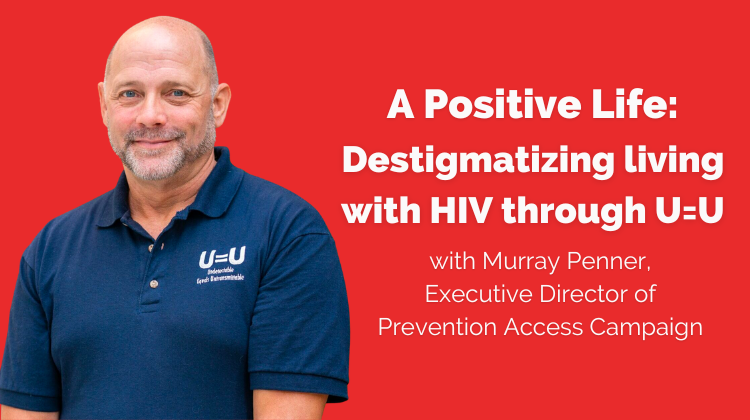 A Conversation with Murray Penner, Executive Director of the Prevention Access Campaign about living with HIV

When did you first find out about your HIV positive status?

Murray: I’ve been living with HIV since 1986. I learned about my diagnoses in a strange way when I applied for life insurance. As a part of that, I was required to do a blood test. I had no reason to think there was any problem with my test.

But, a couple weeks after my test, I got an ominous letter in the mail that said, “Confidential to only be opened by the addressee.” I opened it up and was told I tested positive for HIV and should see a doctor ASAP because this was “life or death.”

How have you seen stigma towards HIV shift and change over time, especially as someone who not only is living with HIV but works in the HIV field?

Murray: There has certainly been progress. But, in many circles, it’s still seen as “dirty” or “gay” or “promiscuous.” This is simply not true. I got involved early on in services, then started volunteering and working in HIV. So, throughout my own journey, I have had community and affirmation that none of the stigma is true.

Even until 2010, I was very uncomfortable sharing my status with partners because I feared rejection or discrimination.

I certainly am now very open about my status and don’t care what others think about it. A lot of that is because of the new tools we have, like PrEP.

Also, when U=U came along, even moreso. Now you can be living with HIV and be undetectable and not transmit to a sexual partner. I don’t have to worry about transmission anymore.

There is a lot of continued opportunity to break that stigma down, especially in less urban places. It’s often equated with being gay which is still not seen as a positive in many places. There’s a lot of work to continue doing.

In your own words, what is U=U and why is it important?

Murray: Many people living with HIV are very aware that they might transmit to someone else, which isn’t a good feeling. U=U has changed that and has broken barriers about loving and living and having a pleasurable sex life.

A lot of people go through feelings about their sex life after an HIV diagnoses that are hard. But because undetectable equals untransmittable, HIV people can go through life without a detectable viral load and continue having fulfilling relationships and sex lives.

U=U is basically the PrEP of people living with HIV. There is also evidence that people are more apt to test if they know about U=U because they know they will be ok if they test positive!

Dating apps, even in the queer community, can still be discriminatory. How do you respond to that?

Murray: Dating apps have moved to including more layers to disclosing one’s status. For example, there are tags that exist where you can disclose your status if you’d like to.

If I see discriminatory language, I take it as an opportunity to educate.

Is telehealth changing the landscape for access to prevention methods and sexual empowerment?

Murray: Telehealth is incredibly important and provides an opportunity for people to reach providers and access health that normally would not be able to. I have friends who have moved from in-person PrEP appointments to Q Care Plus because it’s convenient. They don’t ever have to go to a doctor, take off work, or go through that hassle

It’s an advancement that happened due to COVID-19, but I am glad to see it happen more because we can reach people we used to struggle reaching.

How do you think we can continue working to destigmatize HIV?

Murray: PrEP and U=U balance each other out. If people know about PrEP and U=U, they are far more likely to get tested because they know they have options regardless of their status!

Whenever we are talking about PrEP, we should be talking about U=U and vice versa. It helps normalize the conversation, and both of those tools serve to destigmatize HIV.

Either route you need to take based on your status, you will be able to stay healthy. Things like Q Care Plus are helping break that down, and we are moving in the right direction!

Posted in Blogs
Scroll To Top